The document, which brought Książnica Cieszyńska the chance to add its digital resources to the national, and then European, network of digital libraries, on behalf of the SDL was initialed by the Rector of the University of Silesia in Katowice, professor Wiesław Banyś Ph.D., and signed by the Director of the Silesian Library, professor Jan Malicki Ph.D. and Director of Książnica Cieszyńska, Krzysztof Szelong, in presence of Cieszyn Mayor, Jan Matuszek. The event was accompanied by a meeting with the librarians and archivists from Cieszyn’s region (both sides of Olza), during which Remigiusz Lis, Silesian Library Vice-Director responsible for coordination of the works related to the Silesian Digital Library presented its objectives and current development, while Krzysztof Szelong presented the policy of Książnica Cieszyńska with reference to digital preservation of Cieszyn’s historical collections and results generated so far in that respect.

The digital conversion program was started in Książnica Cieszyńska in 2003. At the pilot stage, based on the internal library resources and simple IT tools, all historical collection catalogs were digitalized. In years 2003-2005, they were available in the Internet, becoming – like the concurrently created databases – an important component of the searchable instrument of Książnica Cieszyńska. Somehow on the margin of digital conversion work related to the catalog documentation, Cieszyńska Biblioteka Wirtualna (Cieszyn Virtual Library) development was started. In 2003, the library offered the first electronic copies of almost 100 works included in the canon of old historical writings in Cieszyn. Despite the fact that the information was only presented in a graphic format without an effective searching system provided, the CVL was hugely popular among the Internet users, which was measured with the consistently increasing number of views and multiple references in Polish and international Internet portals. Its operation allowed Książnica Cieszyńska to identify the needs relating to the availability of electronic versions of documents on Cieszyn Silesia, thus, organizational and technical possibilities of data digital conversion and popularization. These experiences turned out to be exceptionally useful for the preparation of the project of “Protection and preservation of Cieszyn’s writing heritage”, within which the digitization covered the manuscripts relating to the history of Cieszyn Silesia and the collection of old regional daily newspapers and periodicals. By the end of 2009, copying will include 580 000 pages in total, 405 000 pages of which relate to Książnica Cieszyńska only. Apart from TIFF source files and application-based publications in PDF and DjVu formats, preparations include concurrent microfilm reformatting with the aim of permanent archiving. Such management of the digitization process will allow achieving two objectives. On one hand, availability of Cieszyn unique collection sections will be significantly improved, on the other hand, protection will be improved. Total costs of this process will be PLN 679 700.

Conclusion of the “Agreement on cooperation in developing the Silesian Digital Library” followed a few months of negotiations, as a result of which Książnica Cieszyńska made the founders of the Silesian Digital Library make changes in the system of providing access to the digital copies. Based on the request of Książnica Cieszyńska, the SDL was provided with an additional option (see: menu item “Publications of the Participants”), allowing each of the SDL co-founders to present their collections individually, in separate tabs provided with introductory text, their own logos, view counters and summary of recently added and most popular publications. This allows individual libraries to relate their digitization policies more effectively to the interests and needs of the public, i.e. users. On the other hand, for participants of the database, such data presentation method allows not only making current observations of digital conversion progress in their own libraries, but also searching the collections without necessary searching in the entire SDL resources.

Within the process of joining the project of developing the Silesian Digital Library, Książnica Cieszyńska first added its digital copies prepared for Cieszyn Virtual Library, and now, added files processed in accordance with the SDL standards, i.e. files converted to DjVu format and – in case of Latin character prints – formats with OCR layers. The collection, covering the monographs and historical contribution, statistical and source publications, diaries, bibliographies, information guides, which relate directly to Cieszyn Silesia or play a supportive role in the studies of its history,  includes almost 13 000 pages. Within 2009, it will be gradually enriched with digital copies created as a result of the project of “Protection and preservation of Cieszyn’s writing heritage”. Apart from the approximately 1 000 stock items related to the collection of manuscripts form Leopold Jan Szersznik’s Library, there are digital versions of tens of titles of old Cieszyn’s press, including the most popular papers, such as “Gwiazdka Cieszyńska” (Cieszyn Star), “Dziennik Cieszyński” (Cieszyn Daily) or “Silesia”. In total, the digital resources to be made available through the Silesian Digital Library by Książnica Cieszyńska by the end of 2009 is planned to be approximately 420 000 copy pages. This number will place Książnica Cieszyńska among the leading institutions providing access to their resources in the SDL, the resources of which currently include approximately 11 000 items, mainly involving copies of individual editions of newspapers and single-page documents and photographs.

With the initiation of digital preservation work in 2003, Książnica Cieszyńska decided that digitalization should include collections with a strictly regional character, which are unlikely to be included in digital conversion projects realized by other departments. Thus, unlike many other libraries that start digital conversion usually with their incunabula and old prints, Książnica Cieszyńska planned to focus on writings made within the region and relating to the region. This assumption was applied when developing Cieszyn Virtual Library, which was established based on the works included in the canon of old Cieszyn’s literature and needed by every regional researcher. This objective also refers to the selection of materials converted to digital formats within the project of “Protection and preservation of Cieszyn’s writing heritage”. In future, the procedure of collection digitization adopted by Książnica Cieszyńska will be also focused on the regional writings, based on the assumption that inclusion of such writings in the system of national and European digital collections is one of the Library’s fundamental tasks. 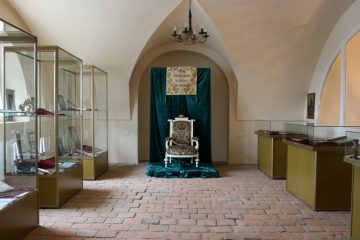 19Imperial Eagle ornamentation on Ludwig Zinzendorf’s walking stick, Postilla of Priest Samuel Dambrowski, portrait of Philip Melanchthon… These items conceal many secrets and revealing them changes our perception of the world.

Purchase of cleaners, dehumidifiers and humidifiers

Microfilming of the collections of the State Archives

On the 12th of January 2009, the State Archives in Katowice concluded a contract with “Mikrofilm-Center, Digital – Center” company based in Poznań for services covering microfilming of the archived collections.