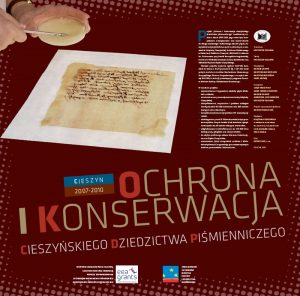 A particularly effective promotional tool in the project was an outdoor exhibition arranged in Cieszyn Historical Library. The exposition including 20 boards sized 120×120 cm and presenting individual libraries and archives participating in the project, their assets and activities realized within the project, obtained an attractive visual design by Marian Siedlaczak. For two months (March-April 2010) it was presented in Cieszyn Marketplace and aroused general interest among the citizens. In May 2010, the exhibition was presented in Katowice, outside the building of the State Archives, then in Warsaw in June, first in the courtyard of Warsaw Public Library, then outside the Cardinal Stefan Wyszyński University Library. Currently it is accessible in a digital version (PDF file) available on the Silesian Digital Library. 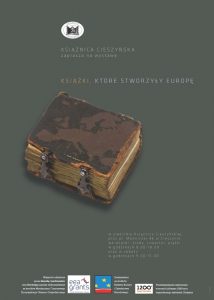 The class of Cieszyn’s collections was also documented on another exhibition organized at the project closure. The exhibition entitled “Books that made Europe” was opened in a gallery arranged in old cellars of Cieszyn Historical Library building, which had been reconditioned and dried as a part of the project. It was devoted to presentation of the literature canon, which formed the civilizational and cultural representation of our continent, from the oldest printed editions of Homer and the Bible, through the works of Dante, Erasmus of Rotterdam, Descartes, Voltaire, Kant, to the writings by Karl Marx and Friedrich Nietzsche. The exhibition was accompanied by a brochure by Anna Rusnok and Krzysztof Kleczek, with a graphic design by Marian Siedlaczek. The digital version of the publication can be accessed on the Silesian Digital Library website.