One of the factors contributing to safeguarding collections against theft or loss is by equipping them with complete records, corresponding to contemporary standards. The other is a search system, enabling checks to be carried out on the contents of the collections, and also facilitating their entry into scientific and cultural circulation. Unfortunately, the overwhelming majority of the Cieszyn library collections and a significant proportion of the archive records possessed very imperfect, archaic catalogues and inventories, or worse, some of the collections lacked records of any kind. The existing search and record tools not only did not correspond to modern regulations, but, burdened as they were by numerous errors, gaps and inconsistencies, did not permit a full assessment of the collections’ contents. This also put their safety at risk, seriously limiting the potential for carrying out preliminary surveys of holdings and the use of the Cieszyn collections in scientific research and cultural initiatives. The project The Preservation and Restoration of Cieszyn’s Written Heritage also achieved a breakthrough in this field. The most valuable parts of the collections were included in the cataloguing process implemented in the project. A total of over 37 500 volumes were processed in the programme, above all pre-1801 imprints and manuscript codexes, and 60 linear metres of archive records.

This process proceeded in accordance with the standards established in Książnica Cieszyńska, where, since the middle of the 1990s, a long-term, exhaustive programme of recording the collections has been carried out. Its principles, established on the basis of an analysis of current legislation, norms and procedures in scientific libraries, were codified in 1998 in a document entitled The structure and principles for recording and processing the library collection of Książnica Cieszyńska (Struktura oraz zasady ewidencji i opracowania zbiorów bibliotecznych Książnicy Cieszyńskiej). The regulations included the procedures and norms defining the principles of processing and inventorying the collection using MAK software, which was implemented in Książnica in 1994. Owing to its adaptation to the special nature of the collection, it became possible to automate the procedure of processing all the categories of the collection, including pre-1801 imprints and manuscripts. Since 2007, the principles operating in Książnica Cieszyńska were implemented under supervision by Książnica staff by all the project’s partners, thus standardising the process of cataloguing their collections. MAK software was implemented in all the participating institutions in the format used by Książnica. This permitted not only the possibility of sharing catalogue descriptions among all the project participants but also enabled them to integrate their databases and make them commonly available online.
In the case of Książnica Cieszyńska, 18 100 volumes were included in the cataloguing process. This meant pre-1801 imprints from the book collections of the People’s Library (Czytelnia Ludowa) and the Deanery Library (Biblioteka Dekanatu) held in deposit in Książnica, and the entire book collection of Leopold Jan Szersznik, i.e. pre-1801 imprints (around 14 400 volumes), imprints from 1801-1950 (3 700 volumes) and 1 000 manuscripts items.

The job of processing these works was put out to tender, and finally awarded to the Zakłady Kórnickie Foundation in January 2008. The work, begun on 18 February 2008, lasted until January 2010. Part of the collections were processed in Cieszyn, where manuscripts, pre-1601 imprints, and other exceptionally valuable or rare items were catalogued. Moreover, multi-volume and large format works were also processed in Cieszyn. The remaining items were transported to Kórnik by a transport company with a concession for the care of objects of historical value.

Among the collection of the Cieszyn Branch of the State Archives, the most valuable documents from the period of Austrian rule were processed, i.e. those of the Teschener Kammer and Cieszyn municipal records. Records of individual elements in subgroups of the inventory were compiled, which facilitates quicker and safer accessibility of records, in this case of 5 000 separate documents.

Apart from that, 1 500 archive records were inventoried and 8 300 books and periodicals – representing the oldest specimens belonging to the archives’ textbook library – were catalogued.

This work continued throughout the entire period of the project’s implementation.
In the Tschammer Library and Archives, 4 000 volumes of pre-1801 imprints and several dozen linear metres of parish archive records were processed. The cataloguing of pre-1801 imprints by five outsourced contractors began in May 2008. A further two were responsible for processing the archive resources. The inventorying and cataloguing of the Archives and Library of the Brothers Hospitallers’ collections (totalling 180 manuscript codexes and 2 900 volumes of imprints, including almost 200 pre-1801 imprints) and of the Library of the Museum of Cieszyn Silesia (almost 3 000 volumes, including 360 pre-1801 imprints) was carried out by the staff of those institutions. 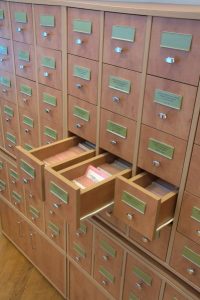 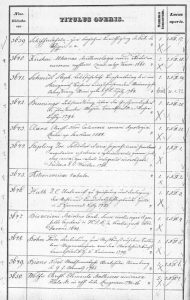 Sheet-based catalogue of the library of Leopold Jan Szersznik from the sixties of the 20th century and one page of the 19th century register of Leopold J. Szersznik Library
Most of Cieszyn’s library collections and archives were provided with very infirm, archaic catalogues and inventory documentation, and what’s worse – some of the collections were not registered at all. The existing tools for searching and records not only failed to conform to the current regulations, but due to the fact of containing many errors, gaps and inconsistencies, they did not allow to keep the full control over the contents of the collections, therefore, their security, which significantly reduced the possibility to make queries and use Cieszyn’s collections for scientific studies and cultural activities.