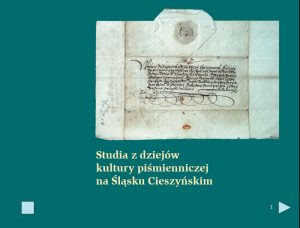 An attempt to attract the direct attention of the researchers to Cieszyn’s collections and their cognitive values was a competition for the best research paper opened on the 29th of October 2008. Rules of Competition allowed submission of research papers related to the following scope: „a) history of writing culture (resourcing, history of resource management systems, history of literature, history of printing and publishing, history of book distribution, history of book-reading, history of libraries and archives); papers based on the above themes should refer to Cieszyn Silesia, or, paper content should contain explicit and rigorously evidenced references to that region, b) protection and preservation of collections in Polish and/or international libraries and church archives, c) projects related to protection, conservation and digitisation of library or archive resources, completed in Poland and/or Czech Republic with the support of the European Union and/or the European Economic Area”. The competition organized by Cieszyn’s Historical Library was under the scientific patronage of the Management Board of the Polish Bibliological Association and editors of “Knihy a Dějiny” (Books and History) (Prague), “Library Review” (Warsaw) and “Library Annals” (Wrocław) magazines.

Until the 31st of March 2009, i.e. deadline for applications specified in the rules of competition, 10 applicants reported their intent to participate. Finally, by the 31st of October 2009, e.g. deadline for submittal of finished papers, only five papers were submitted. All research papers were assessed by the Competition’s Committee designated by Cieszyn Historical Library in cooperation with institutions having scientific patronage over the competition. The committee included: Hanna Łaskarzewska M.A. (Warsaw), prof. Anna Migoń Ph.D (Wrocław), prof. Zdzisław Pietrzyk Ph.D (Cracow) and Richard Šípek Ph.D (Prague). Each member of the jury reviewed the submitted papers individually, considering the research and cognitive values and principally the importance of their contribution to the development of research on issues covered by the competition.

By a unanimous decision of all jury members, the best research paper was prepared by Radim Jež Ph.D who was awarded the first place in the competition. His article entitled “The correspondence of the last Piasts of Teschen (1524-1653) from archive collections in the Czech Republic and the Teschen city”, contains a source study of approx. 1000 letters of Piast Dukes of Cieszyn, who were found by the author in 11 archive, library and museum units both in Czech Republic and Poland. An important component of the paper is its annex containing tabular presentation of data related to places and dates for individual letters, their senders and addressees, language, stamps (if used) and editions. As it was emphasized by all jurors, the extensive thesis of R. Jež, provided with a broad back matter and clear structure, brought not only significant facts but also opened new research possibilities by combining reliable, meticulous information with a skillful method of its presentation.

The jurors awarded the second position to Matyáš Franciszek Bajger Ph.D for his work “Frydek church books. Origins of collections and literature culture in contemporary Roman Catholic parish in Frydek”. The paper relates the history of the parish church library in Frydek established in 1563 and preserved until today. The author, concentrated on the analysis of the book collection, also describes the role of the library in the structure of Catholic Church and people associated with its history and refers to its organization. The jurors emphasized good knowledge of the resources and literature related to the history of church library collections and pointed to details of the thesis prepared by M. F. Bajger and its compliance with standards applicable to contemporary historiography of libraries.
The third position in the competition was awarded to Renata Czyż Ph.D, whose thesis entitled „Polonica of the Library at the Evangelical Elementary School in Wisła” concerns the history and assets of the unique school book collection from Cieszyn Silesia region. The author, presenting the history of Wisła’s collection and performing a detailed analysis of its polonica, reconstructed their publishing topography, identified the ways by which they reached the library and, finally, attempted to discover further fortunes of the books collected in the 19th c. All jurors underlined the sourcing values of the work, which significantly expand the knowledge on the Silesian writing history.

The official publishing of the competition results was presented on the 4th of March 2010, during the official summing up of the project “Preservation and restoration of Cieszyn’s written heritage”. During the celebration organized in the conference room of Cieszyn City Hall, the winners received their awards.

Although the number of five papers being submitted to the competition may not be considered as very impressive, the scientific value  of awarded theses, their contribution to the development of research on writing culture of Silesia allow to deem the initiative as successful. These assessments are also a reason for which Cieszyn Historical Library decided to publish the awarded papers in a digital format: “Studia z dziejów kultury piśmienniczej na Śląsku Cieszyńskim” (Studies in the history of writing culture in Cieszyn Silesia). In editorial terms, these were prepared for publication by Karel Müller Ph.D and prof. Janusz Spyra. The composition and graphic design of the publication was managed by Kazimierz Gajdzica.

After the e-books  (Annalist and historian. Strong and weak points of regional historiography) and (Between theory and practice. Protection of collections in small libraries and archives) published in 2007 and 2010 and containing materials from the conferences organized by the library, this is already the third publication of Cieszyn Historical Library available in a digital format only. Its publication in such form is a consequence of a willful decision by the publisher with a belief that popularization of case studies in a digital format is much more effective than traditional publishing them in print. A digital publication not only offers faster communication of the competition results but also access to a much wider target group.