“Between Theory and Practice” Conference 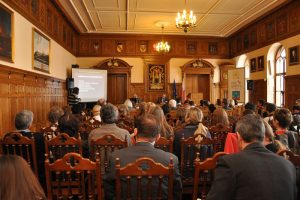 The conference “Between Theory and Practice. Preservation of Collections in Small Libraries and Archives” was held on 3-5 of March 2010 as an essential element of the series of events called collectively “Cieszyn – A Town of Books”, which closed the project ”Preservation and Restoration of Cieszyn’s Written Heritage” started on the 1st of April 2007. The conference was attended by more than 90 persons, mainly book conservators and librarians who came to Cieszyn almost from the whole country, as well as Czech Republic, Germany and Holland. The participants could attend 18 lectures.
The conference, intended as a place for confronting standards, regulations and various countries’ proposals for model solutions related to preservation of library and archive collections including practical experiences, it also provided the basis for presentation of the achievements of institutions participating in the project. By creating another opportunity for popularizing the information on the project course and effects, it also became an occasion for summarizing Cieszyn’s experiences related so far to the theory of preservation and conservation of library collections with the practices in this field adopted by other libraries of comparable size and specifics. Such focus of the conference resulted from the belief of project participants that their experiences having a pioneering character in many aspects, may become not only inspiration to institutions that struggle with risks similar to those that until recently have afflicted most of Cieszyn’s libraries and archives, but may also turn to be a source of very specific information on the possibilities and methods of preventing such hazards, problems and risks related to that task.

Justification of those assumptions can be evaluated by an e-book containing lectures presented during the conference, which were grouped in the publication in three thematic categories “Theory”, „Practice” and „Cieszyn’s Experiences”. The extensive e-book, edited by Anna Czajka and Remigiusz Lis, was provided with simple but functional navigation tools. User-friendly publication format, based on Kazimierz Gajdzica’s layout, allows reading the e-book on the monitor screen.